http://www.demos.org/blog/4/30/14/why-minimum-wage-vote-failed-today
Posted by Heather McGhee on April 30, 2014
Today, Senate Republicans filibustered a proposal to gradually raise the minimum wage to $10.10 an hour. That filibuster may seem like a big surprise considering opinion polls—72 percent of the public are in favor of the proposal—but it makes a lot of sense when you consider who our elected officials hear from the most, and what that increasingly rarefied group thinks about policy.
Our system is dramatically skewed toward big donors who feel differently about policy from the rest of Americans. One estimate showed members of Congress spend nearly half of their time in D.C. talking to these donors.
The idea that minimum wage workers should be able to work their way out of poverty gets majority support across the board. Recent research draws on data from nearly two thousand policy initiatives to show that “economic elites and organized groups representing business interests have substantial independent impacts on U.S. government policy… while mass-based interest groups and average citizens have little or no independent influence.”
An example from our Stacked Deck report: 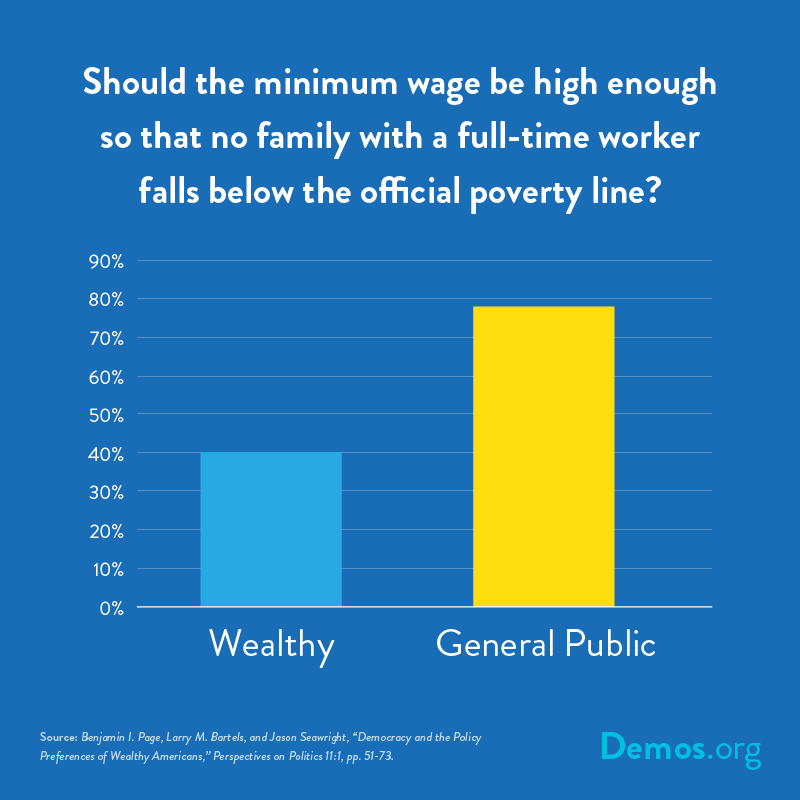 The massive influence of the donor class also stems from their increasing economic clout. A report last week from my colleague Catherine Ruetschlin shed light on the particularly stark example of fast food, where the CEO-to-worker pay disparity has quadrupled since 2000 to over 1,200-to-1 in 2012. But that trend carries across the board—workers who desperately need a raise are making less, and CEOs who largely dictate the policies that shape workers’ lives are making more.
This shift has coincided with an intensification of elite influence over political campaigns. McCutcheon v. FEC, a recent Supreme Court decision that doubled down on Citizens United, will intensify the power of those elite donors—we predict between now and 2020 elite donors will give over a billion dollars more as a result of the decision.
Even under Justice Roberts’ corporate court, we can still have a voluntary system of small-donor public financing like residents enjoy in Connecticut and in New York City. Our report, Fresh Start, shows how public financing helps free the legislature to respond to the people’s needs. Shortly after enacting public financing, Connecticut increased their statewide minimum wage. A similar system could work for Congress. The proposal is called the Government by the People Act and it needs your support.
Hard-working Americans deserve more than $7.25 worth of influence in Washington.