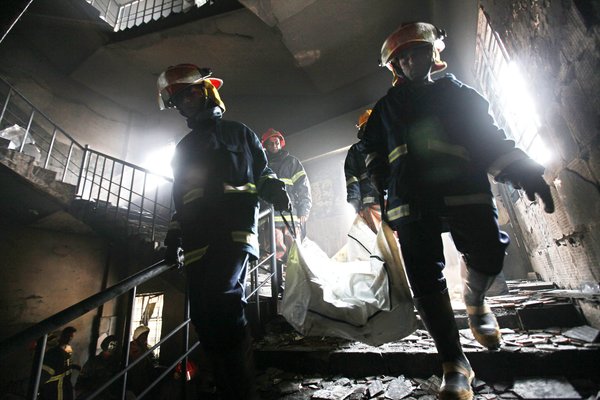 Rescue workers at the Tazreen fire in 2012.

One year after the Tazreen factory fire in Bangladesh, many retailers that sold garments produced there or inside the Rana Plaza building that collapsed last spring are refusing to join an effort to compensate the families of the more than 1,200 workers who died in those disasters.

The International Labor Organization is working with Bangladeshi officials, labor groups and several retailers to create ambitious compensation funds to assist not just the families of the dead, but also more than 1,800 workers who were injured, some of them still hospitalized.

A handful of retailers — led by Primark, an Anglo-Irish company, and C&A, a Dutch-German company — are deeply involved in getting long-term compensation funds off the ground, one for Rana Plaza’s victims and one for the victims of the Tazreen fire, which killed 112 workers last Nov. 24.

But to the dismay of those pushing to create the compensation funds, neither Walmart, Sears, Children’s Place nor any of the other American companies that were selling goods produced at Tazreen or Rana Plaza have agreed to contribute to the efforts.

Supporters of compensation plans say they are needed to pay for medical care for those who are paralyzed or otherwise badly injured, to provide income after a vital breadwinner died and to give families enough income so that children are not forced to quit school and go to work.

“Compensation is so important because so many families are suffering — many families don’t have anyone left to support them,” said Kalpona Akter, executive director of the Bangladesh Center for Worker Solidarity. “There’s been a good response from some European brands, but so far none of the U.S. retailers have agreed to pay a single penny for compensation.”

Paul Lister, Primark’s general counsel, said that from the day Rana Plaza collapsed, his company recognized its responsibility. Primark, which says it has already spent more than $3.2 million for aid to the victims, first provided several weeks’ emergency food assistance to 1,300 families, then short-term financial aid and now it is working to develop a compensation fund to help victims for years, even decades.

“We knew we were having clothes made in Rana Plaza — we announced that on the first day,” Mr. Lister said about the April 24 building collapse, which killed 1,129 workers. “When you know where your clothes are made, then you take responsibility for the results of where your clothes are being made. We have said very clearly that we would work to support the workers — and the families of the workers — in our supply chain.”

Primark, whose brands include Atmosphere and Denim Company, was a major customer of New Wave Bottoms, one of the five garment factories inside Rana Plaza. For the last six months, Primark has paid the salaries for not just that factory’s 550 workers but for all 3,600 Bangladeshis who worked inside the building. After setting up a series of help desks for Rana Plaza workers and families to register, Primark paid the salaries to surviving workers or families of the dead.

Primark has also pledged to pay another three months’ salary if no other company steps up, but Loblaw, a Canadian retailer that makes the Joe Fresh brand, has agreed to join that effort. Primark says it has paid somewhat more than the $38-a-month minimum wage for each worker, totaling at least $136,000 a month.

Bob Chant, Loblaw’s senior vice president for corporate affairs, said, “We believe we have a moral obligation to support the workers who are producing our products. Our chairman has voiced disappointment that more brands haven’t stepped up.”

Primark, Benetton, Loblaw and El Corte Ingles are working closely with the International Labor Organization to set up what would be one of the largest industrial compensation funds in history — one with perhaps $70 million to help the long-term needs of the Rana Plaza survivors and families. Advocates are urging more than 20 European and American retailers to commit money for compensation.

There are precedents for such a fund — after 29 workers died in the Hameem garment factory in Bangladesh in December 2010, Gap, J. C. Penney and Target joined other retailers in paying into a modest compensation fund.

Even as labor advocates single out Primark for praise, they single out Walmart for criticism — partly because production documents recovered after the Tazreen fire indicate that two months before that fire erupted, 55 percent of the factory’s production was being made for Walmart contractors. Walmart has repeatedly been asked to contribute to the anticipated $6 million compensation program for Tazreen survivors and families.

“Walmart is the one company that is showing an astonishing lack of responsibility, considering that so much of their product was being made at the Tazreen factory,” said Samantha Maher, a campaign coordinator for the British arm of the Clean Clothes Campaign, a European anti-sweatshop group.

Walmart has also been asked to contribute to the planned Rana Plaza fund because production documents were found in the building rubble indicating that a Canadian contractor was producing jeans for Walmart in 2012 at the Ether Tex factory inside the building. Walmart said that unauthorized contractors were producing garments without the company’s knowledge.

After the International Labor Rights Forum, an advocacy group based in Washington, wrote to Walmart to urge its participation in the compensation efforts, Rajan Kamalanathan, Walmart’s vice president for ethical sourcing, responded in an email that Walmart did not intend to participate. He wrote that “there was no production for Walmart in Rana Plaza at the time of the tragedy” and that the Walmart-related production at Tazreen was unauthorized.

In that email, made available by the labor rights forum, Mr. Kamalanathan made clear that Walmart was looking to the future: “Our focus is to positively impact global supply chain practices both by raising our own standards and by partnering with other stakeholders to improve the standards for workers across the industry. We will continue to invest our resources in proactive programs that will address fire and building safety in the garment and textile industry in Bangladesh to help prevent tragedies before they happen.”

The Children’s Place, which had used one of the factories inside Rana Plaza, but said that factory was not supplying it when the building collapsed, declined to comment about contributing.

Asked whether Sears would provide monetary aid for Tazreen victims, Howard Riefs, a company spokesman, did not indicate an intention to do so, but said his company “remains committed to improving conditions in the factories we utilize for production of our merchandise.”

Sears said an unauthorized contractor had been producing on its behalf at Tazreen. With Walmart and 24 other American and Canadian companies, Sears has joined an alliance to upgrade factory safety in Bangladesh.

Some industry analysts say Walmart, Sears and other American retailers are reluctant to joi
n the compensation efforts because they fear it could be seen as an admission of wrongdoing, perhaps leading to legal liability. Some also say the Americans fear they will look hypocritical if they contribute to a compensation fund after they asserted that any production done for them in those factories was unauthorized.

Advocates hope that the compensation plans will soon take effect, replacing the short-term financial aid from Primark and Loblaw. The Bangladeshi government and Bangladeshi manufacturers are also being asked to contribute, and the size of the funds would be based on a formula that takes into account the level of workers’ wages, the extent of survivors’ injuries and the number of years employees would have worked had they not been killed or injured.