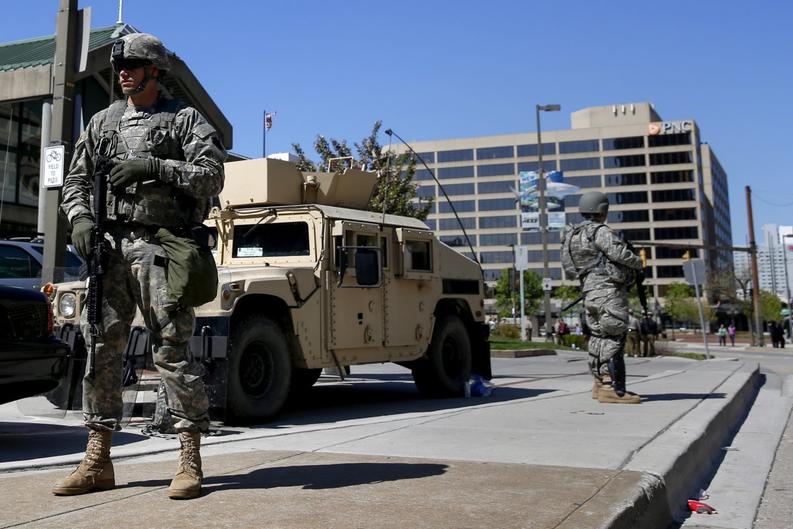 Last night, as most Baltimoreans are no doubt aware, Maryland Gov. Larry Hogan signed an executive order declaring a state of emergency, activating the MD National Guard to help quell the violence and chaos that erupted across the city Monday afternoon and evening.
It is the first time the National Guard has been deployed because of civil unrest in the state since the aftermath of April 4, 1968 assassination of Rev. Martin Luther King, Jr. The current violence and unrest comes in the wake of protests around the death of 25-year-old Freddie Gray, who died in police custody nine days ago.
For the second straight day, the Orioles have announced, tonight’s game against the Chicago White Sox will be postponed and a possible double-header will be played tomorrow. Wednesday’s game will played at 2:05 p.m. and will be closed to the public.
The National Guard remains a visible presence around the city today, from West Baltimore, where riots first broke out, to City Hall and the Inner Harbor. More than 500 National Guardsmen are here supporting the operation, with a target of 2,000 troops activated to provide support by the end of the day, according to a statement this afternoon from Hogan’s office. There are also more than 400 state troopers and other allied law enforcement officers from Maryland in Baltimore as well as 300 law enforcement from Pennsylvania, 150 from New Jersey, and 45 from the District of Columbia. So far there have been more than 200 arrests and at least 19 structure fires. From surrounding counties, 37 fire engines, eight truck companies, and two heavy rescue units from surrounding counties have been called.
It’s worth noting that the executive order, which can be found here, is also perquisite for potential federal assistance.
The National Guard will remain activated until the state of emergency is lifted.
The governor, who has set up an office in Baltimore, was scheduled this morning to meet with faith and community.
Also last night, Mayor Stephanie Rawlings-Blake announced that city officials are imposing a weeklong curfew, starting this evening, from 10 p.m. to 5 a.m.
The new, weeklong curfew that the mayor issued last night and begins this evening requires people to be off city roads and out of “public places” unless they are driving to or from work or have a medical emergency. A violation of the curfew, which is laid out below, places constitutes a misdemeanor offense and places individuals at risk of arrest.
From the official curfew order:

The new curfew is on top of the city’s current juvenile curfew, in place since last year, which requires minors under 14 years of age to be indoors by 9 p.m. on school nights. Minors under 17 years of age are required to be indoors by 10 p.m. on school nights and 11 p.m. on weekends.
In addition to the ongoing curfew for juveniles: “Minors may not be in a public place except when accompanied by the minor’s parent; when strictly necessary to travel to and from school when required to be at school, and when going to or returning from an official school, religious, or other recreational activity supervised by adults and sponsored by the City of Baltimore, a civic organization, or another similar entity that takes responsibility for the minor.”
Also: “No operator of an establishment or his agents or employees may knowingly permit any minor to remain on the premises of that establishment if that minor’s presence would violate the subsection above.”
At noon Monday, Rawlings-Blake’s office sent out an email to business and community leaders clarifying specific questions about the curfew.
The mayor’s office’s letter:

Dear Business and Community Leaders,
Many businesses have asked about the curfew policy being implemented tonight and its impact on business hours and employees. Below are key points:
1. The night-time curfew applies for all citizens (with exceptions of emergency personnel and those commuting to and from work for essential functions, including students traveling to/from classes).
2. Non-essential business operations should be suspended from 10:00 p.m. until 5:00 a.m. This includes restaurants, entertainment venues and bars, which should be closed during these times. Please ensure visitors and patrons have enough time to travel before the curfew begins.
3. For essential business operations, employees traveling to and from work during the curfew should have a valid picture ID (presumably a driver’s license) and a document from their employer stating their need to work during curfew hours with dates and employee hours.
4. Drivers or individuals may be stopped by law enforcement and should be prepared with the information above to avoid arrest.
The curfew will begin today, Tuesday, April 28th at 10:00 p.m. and be in place for approximately one week (or until needed).

Finally, also at noon, the mayor’s office said Rawlings-Blake will be meeting with clergy at 12:30 p.m. Tuesday at the Bethel A.M.E. Church on Druid Hill Avenue to discuss church strategies to protect City residents from vandalism and violent protests and that she will update the public on the latest developments in the protests and rioting in the city.