There have been growing calls for electoral participation in the wake of the Trump presidential victory and the horrendous political and social climate that have come in its wake. Most of these voices encourage a social movement strategy called “inside / outside” organizing which argues that protest, mobilizations, and disruptions are good, but that social movements also need “inside” political actors – elected officials – who are sympathetic to movement goals and can help push progressive agendas forward. Many call for supporting progressive democrats. Some favor breaking from democrats and creating a third party.

As logical as the “inside / outside” strategy is, it is a deeply flawed, and the movements of teachers and education workers in the “Red for Ed” movement show an improved way forward. 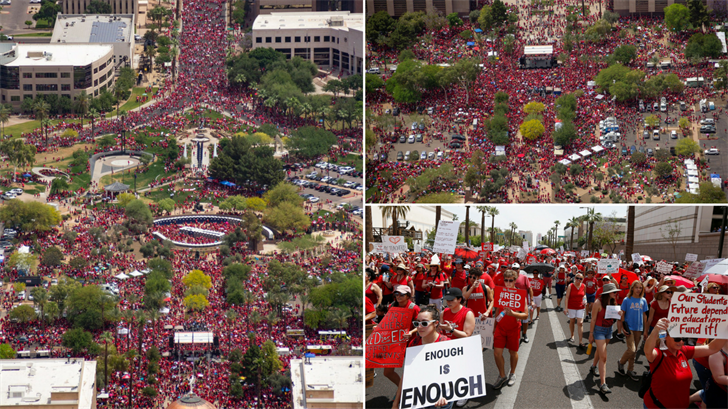 Arizona teachers just won a 20% pay increase after a week long strike that shut down the state’s schools. Like much of the country, teachers in Arizona faced miserable working conditions and underpay, a crisis that only got worse since the 2008 crisis. Their strike turned that around. In addition to a 20% pay increase, the state has put hundreds of millions of dollars forward for increased education spending, including fully funding the cuts from the 2008 crisis, providing tens of millions of building renovation and renewal, and millions for improved student mental health resources on campus.

What is most remarkable, they won in a deeply red state. The state governor, Doug Ducey, is an arch-conservative. His policies have included attempts to repeal the Affordable Care Act, to support keeping up confederate monuments (Arizona was not in the confederacy), and state wide austerity policies that led to 400 firings of state workers. The state legislature is dominated by some of the worst republican toads in the country, including senator Steven B. Yarbrough who as recently as 2015 argued for harsh cuts to the state budget, and JD Mesnard who worked to restrict voting access in his own district. Even with these republican conservatives dominating state politics, teachers have won tremendous policy transformations.

Why? Because political power is more than just who holds office – it is about building power with each other – in the streets, for massive mobilizations and demonstrations – but in our jobs too. When we take workplace action like this, our schools, business, and the state governments cannot function. This is a tremendous source of power that “trumps” whoever may be in office. As the late Howard Zinn wrote, “what matters most is not who is sitting in the White House, but “who is sitting-in” — and who is marching outside the White House, pushing for change.”

The Arizona teachers show this so clearly, as do those of Oklahoma, and West Virgina. So too for the students from Parkland Florida, who have transformed their republican governor’s stance on guns through their direct action.

Instead of “inside / outside” we need a movement strategy that builds organization and protest, an “outside & organizing” framework. When we fight this way, we win.